Drones for health – How ‘sky ambulances’ save lives (13 min read)

To ensure access to blood units for citizens in need, the government of Rwanda has implemented an innovative solution. In a partnership with a Californian start-up, drones deliver medical products in the East African country - and similar projects continue to improve outcomes for patients all over the world.

Hundreds of people line a fence in the Muhanga district, Rwanda, and were staring curiously at a lawn where a small plane, not bigger than an adult arm span, was placed on a metal ramp. Their eyes tried to follow as, within seconds, the tiny plane soared into the air and disappeared into the horizon.

At the same time, dozens of kilometers away, beyond impassable mountains and washed-out roads, 24-year old Françoise lay in a bed at Kabgayi Hospital, fighting for her life after giving birth. It was in late 2016, when Françoise was hemorrhaging, which is the leading cause of maternal death in low-income countries1. “Something had gone wrong during the birth, so afterwards they kept stitching me again and again. It wasn’t until the fourth try that they were successful,” she remembers2.  In the meanwhile, Françoise had lost a lot of blood. But the hospital didn’t have her blood type in stock – and she needed blood fast to survive. What she didn’t know at that time was that life-saving treatment was already on its way, carried by the drone that had launched in Muhanga just a few minutes before.

What might sound like an extraordinary event has saved hundreds of lives across western Rwanda. There, a fleet of medical drones serves 21 hospitals, providing instant access to blood products for eight million people. Air transportation like this clearly has its advantages in this East African republic, which is also known as the “country of a thousand hills.” While the 1,000-kilometer long main road network is paved and well-developed, many side roads are in very poor condition. This variability makes some regions difficult to integrate into a logistics plan. The result had been area hospitals needing multiple hours to pick up blood at a regional center.

Rwanda is far from alone in this problem: Throughout the developed and developing world, access to life-saving and critical health products is hampered by what is known as the last-mile problem -- the inability to deliver needed medicine from a city to rural or remote locations because of inadequate transportation, communication or supply chain infrastructure. The result is that all too often someone in need of lifesaving care does not receive required medicine. Worldwide, more than two billion people lack adequate access to essential medical products, including blood and vaccines, because extreme terrains and gaps in infrastructure hinder all but the most heroic efforts3.

A big bet on smart technology
“Every second you gain in saving lives is critical,” explains Dr. Diane Gashumba, Minister of Health in Rwanda. For this reason, the government and the Ministry of Health teamed up with the Silicon Valley start-up Zipline in 2016. “Because Zipline offered a solution to blood shortages in rural areas, the government of Rwanda didn’t hesitate,” she adds4.  Together, they now operate the world’s first national drone delivery system to carry urgent medicines to patients in need.

“Most people think that advanced technology cannot start in Africa,” says Keller Rinaudo, CEO of Zipline. “But it was the Rwandan Ministry of Health that made a big bet on the potential of this technology and signed a contract with us to deliver a majority of the country’s blood on demand.” The idea behind the venture is both smart and effective. 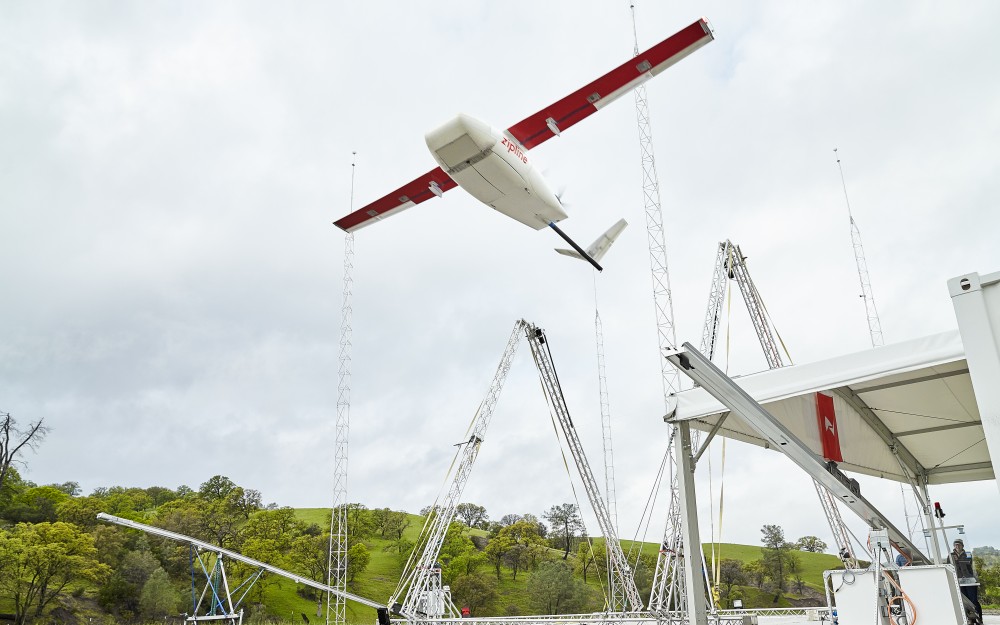 Zipline has flown more than 300,000 km in Rwanda: This is almost the distance from the earth to the moon. And it has delivered 7,000 units of blood in over 4,000 flights. 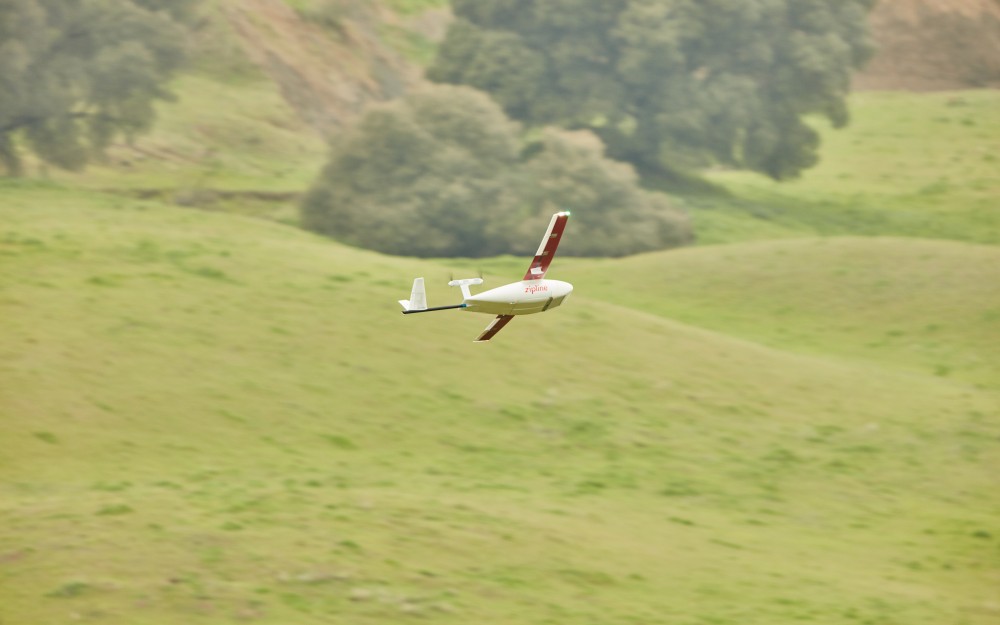 Approximately one-third have been in emergency life-saving situations. 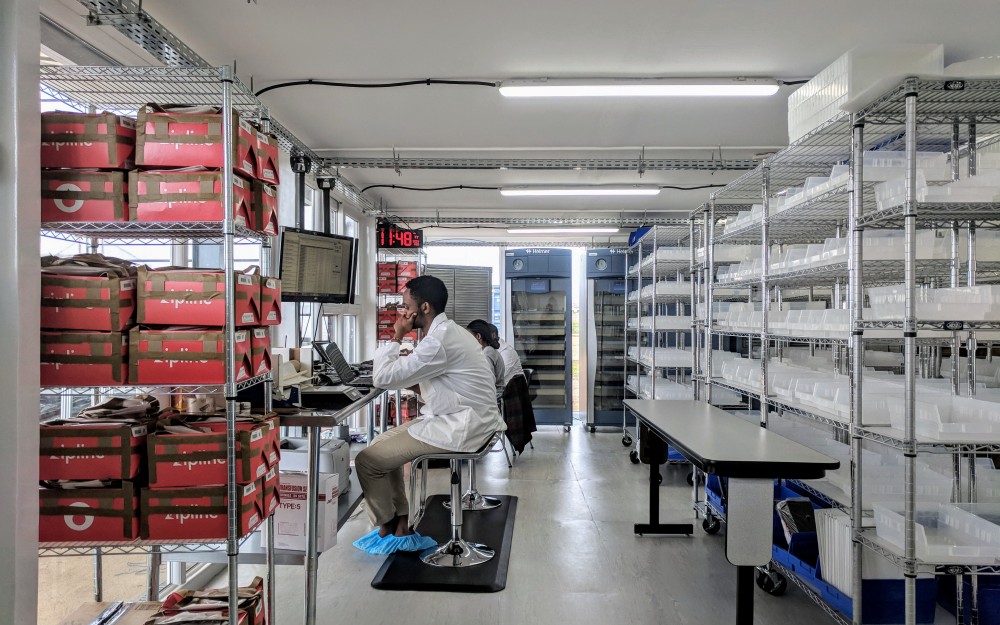 The National Service for Blood Transfusions of Rwanda fulfilled 96% of the blood demands of the national hospitals with help of Zipline. In 2014, before Rwanda’s partnership with Zipline, it could only fulfill 49%. 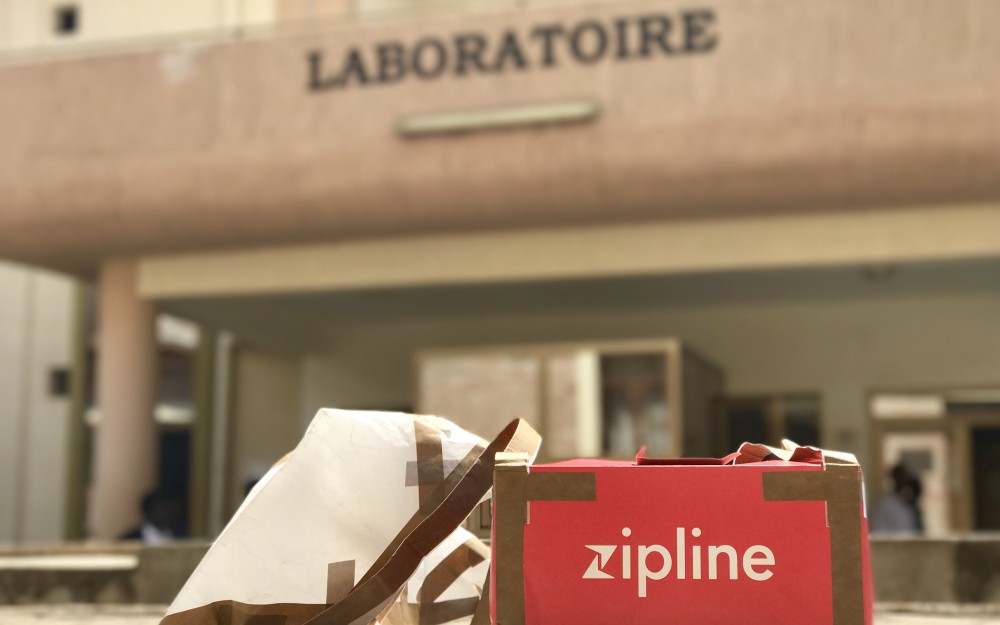 The drones have reduced the time between ordering and receiving the blood from as long as four hours to a maximum waiting time of 30 minutes.

Eliminating waste, gaining access
Zipline drones – also called Zips – are specifically designed for their task. Compared to quadcopters, for example (another type of drone, with four rotors and four arms ending in propellers), battery-powered Zips are more efficient on long distances: They can deliver reliably to any site within an 80-kilometer radius on a preprogrammed route and with real-time monitoring. In contrast, a quadcopter can reach only a radius of approximately five to ten kilometers. This makes a huge difference when trying to serve an entire nation like Rwanda. With a quadcopter, it would be possible to reach an area covering around 10,000 people – but Zipline drones can cover areas of 7 million people5. Accelerating from zero to over 100 kilometers per hour in half a second, Zipline drones deliver essential medical products of up to 1,8 kilograms per flight while maintaining the cold chain if needed – in an average fulfilment time of 30 minutes.

Each Zip is sending its position every couple of seconds on the trip to and from the hospital. This way, the team can permanently track the drone and ensure a safe delivery. (credit: Zipline)

These drones also tackle a general problem in health logistics, which is balancing waste and access. “To ensure access, hospitals and health centers stock a lot of medicine, so that patients have the medicine they need. But that leads to a lot of waste when the supplies expire,” says Rinaudo. In cooperation with Zipline, Rwanda has escaped this vicious cycle. As in Françoise's case, it is rarely possible to predict the demand for blood, and even more unlikely to know which blood type is needed. “By using our technology, Rwanda has been able to keep more blood in a central location and then provide it immediately to a patient in a remote hospital or health center,” says Rinaudo. “In the last nine months, zero units of blood have expired, and thus been wasted, at any of these hospitals,” he adds. “That’s an amazing result that has not been achieved by any other healthcare system.”

Access in emergencies and disasters
The collaboration in Rwanda is an example of the potential that drone technology has in healthcare. These small airborne vehicles can assist wherever infrastructure is poor or when natural disasters mainland-based transport routes are blocked. In fact, this was one of the earliest medical utilization of drones: Unmanned vehicles successfully delivered small aid packages after the Haitian earthquake in 20126. They were also able to help in humanitarian operations for collecting data and imagery where infrastructure was destroyed or already lacking, such as in the Philippines after a typhoon in 20137. While drones were used sparsely in both situations, they nevertheless demonstrated their usefulness.

To further explore their potential, a partnership between UNICEF and the Government of Malawi launched in 2017, creating an air corridor to test the humanitarian and developmental use of drones. This air space in central Malawi will be used as a test site for aerial scouting in crisis situations and for the delivery of medical supplies. It will also use agile quadcopter drones to boost Wi-Fi and cellphone signals8.

Drones can also be used in the immediate aftermath of emergencies, including man-made ones, where too many people are injured for rescue services to attend to everyone. In other cases, entering an accident site would be too dangerous, such as in shootings or hazardous outbreaks. For these reasons, scientists at William Carey University in Hattiesburg, Mississippi9, have developed a Healthcare integrated Rescue Operations (HiRO) drone that can quickly deliver a 20-pound medical kit to emergency scenes. Each supply set includes a smartphone, and the kits can be adapted for different situations. For example, there is a set for accidents on farms, in the wilderness or anywhere there is a traumatic event.

The rise of airborne medical couriers
As countries around the world face the challenge of delivering medical supplies quickly and efficiently, drones are launching for a growing range of missions. For example, the Rwandan government’s trust in drone technology has inspired a neighbor to follow its lead. In 2017, Tanzania, announced its plans to adapt the Zipline drone delivery system to improve access to essential medicines as well as basic surgical supplies. Up to 2,000 deliveries per day are planned to fly to more than 1,000 health facilities and 10 million people across the country.10

Of course, lack of access to medical products is not tied to a geography or region. “Millions of people across the world die each year because they can’t get the medicine they need when they need it,” said Zipline CEO Keller Rinaudo. “It’s a problem in developing countries, but also in developed countries.” This is why Zipline has expanded its services to the US. “There’s a linear relationship between how far away you live from a city and your expected lifespan. Our hope is that this type of technology can solve those kinds of inequalities.” The company is already working with state governments in Maryland, Nevada and Washington, and with leaders on Native American reservations, particularly to reach patients in remote or isolated areas.

But barriers to medical access can also appear in places least expected. Even in high-income nations with a well-developed infrastructure, problems are more likely to be caused by too much traffic. Especially at peak times, medicine deliveries often have no chance of reaching their destination quickly. In urgent medical cases in Switzerland, for example, drones fly above the traffic congestion to transport medical samples from hospitals to laboratories. The initiative, developed in partnership with the Swiss national postal service, is set to launch in 2018 and plans to deliver other medical products as well.11 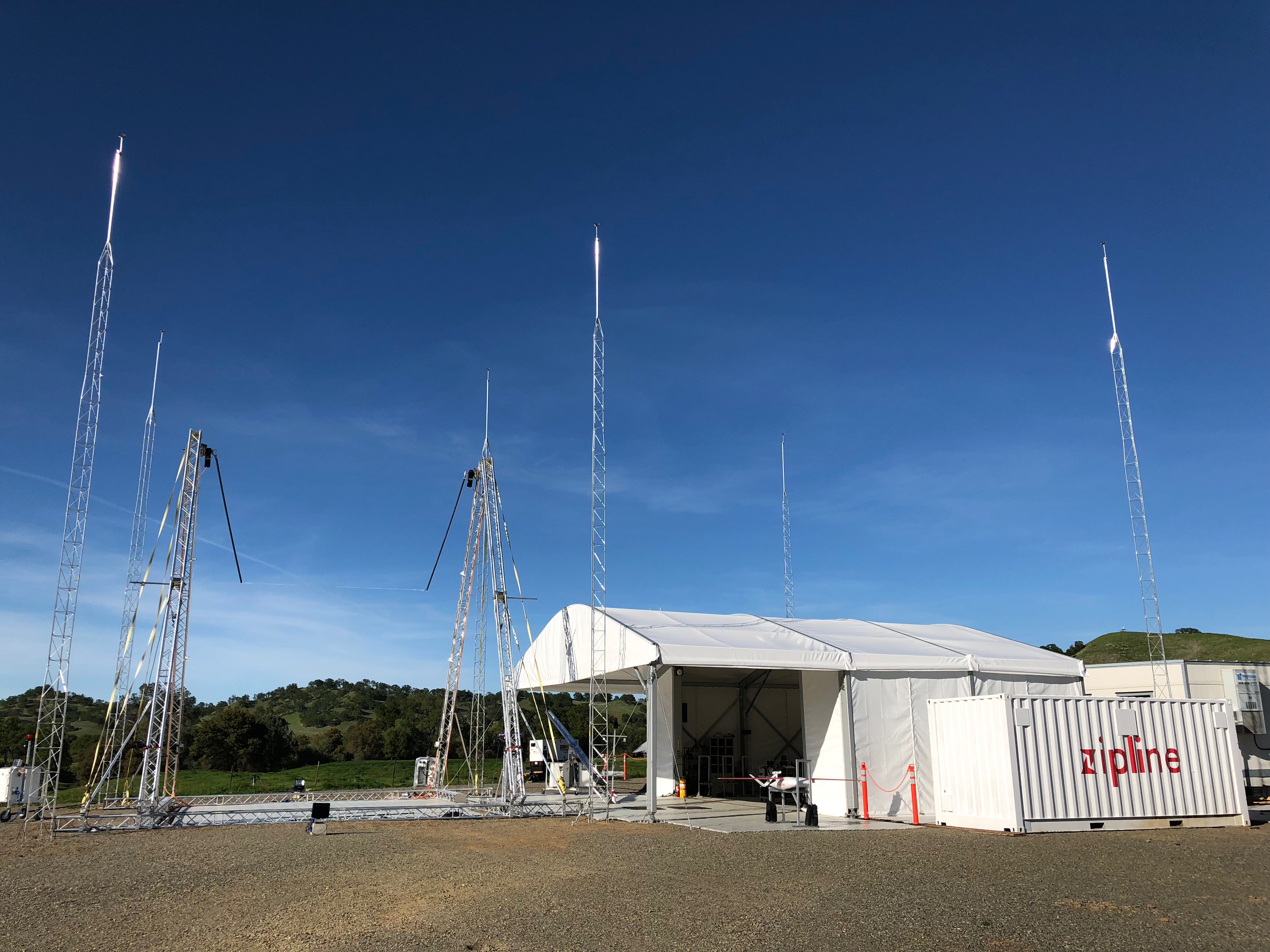 From this distribution center near Rwanda's capital, Kigali, drones take off every day – and transport lifesaving blood to patients. (credit: Zipline)

Cheering for the ‘sky ambulance’
Whether flying over jammed roads or impassable mountains, drone technology is improving access to medicine. “From the time the hospital requested the blood to receiving it, less than five minutes passed,” Françoise says. “It was very fast.” While in the hospital, she didn’t know that a drone delivered the blood she received. Today, she knows, and she's a firm supporter. “I feel that everyone should have access to this service. Without it, I would not be here today, and there are many others like me who have benefitted.”

Zipline CEO Rinaudo regularly visits the drone site in Muhanga. Every day, hundreds of Rwandans line the fence of the distribution center to watch operations. The whole crowd cheers for every take-off and landing. “Some kids show up at 6 a.m. to get good seats. When we ask them what they think about the drones, they say they are the ‘sky ambulances’,” Rinaudo notes. "It's not only the novelty of the drones that makes them cheer. Today they understand what this technology means for them and their families." 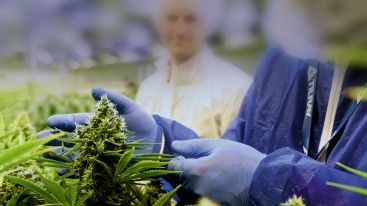 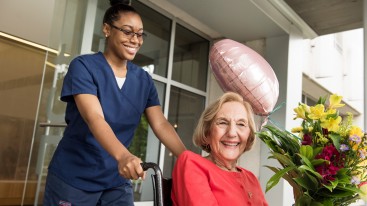 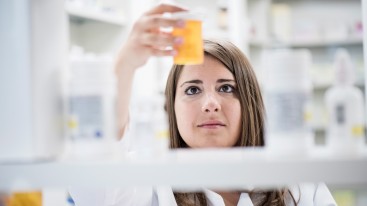