When the composition of a society changes, the demands made on medical services also change. Some examples from around the world show how understanding demographic shifts can help healthcare systems to adapt.

Aging in Asia, urbanization in Africa, increasing ethnic diversity in the US: these three demographic trends may seem very different, but have one thing in common. They are transforming the makeup of entire societies, placing new demands on medical services and challenging healthcare systems in totally new ways.

It’s a typical evening in a big Chinese city. In public parks and open spaces, you can see rows of people – most of them elderly – practicing self-choreographed moves for a traditional dance, or moving slowly through Tai Chi exercises. This type of public sports gathering is a visual illustration of a key demographic change: many societies are aging rapidly. The Asia-Pacific region, for example, is already home to more than half of the world’s seniors, age 60 years or older, and the rapid population aging is set to continue.1 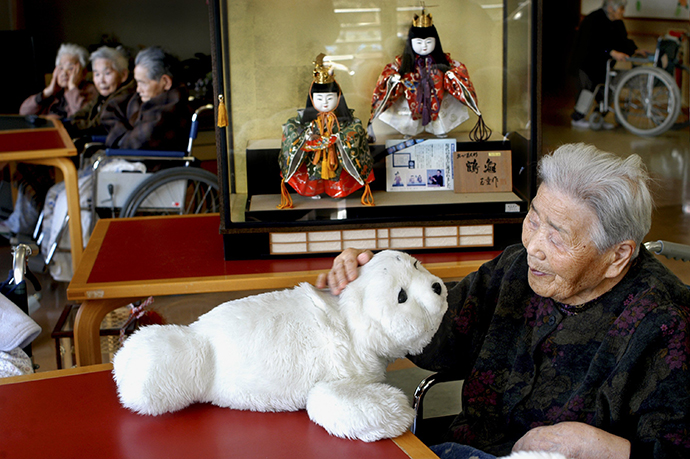 Therapeutic robots offer comfort, and can help to maintain mental and physical health of seniors. In a nursing home in Tsukuba, Japan, an elderly woman strokes a robot seal that responds to touch and sound. Credit: Panos Pictures / VISUM

Why has the age structure changed in recent decades? One major factor is a declining birth rate. At the same time, people are living longer. And the baby-boomers born in the 1950s and 1960s are approaching retirement age. Japan, where more than a quarter of the population is age 65 or older,2 leads this trend – and Japan also shows the socioeconomic consequences of this shift in age ratios. One consequence is that a shrinking workforce has to support growing numbers of pensioners, including the rising medical cost of taking care of the elderly. 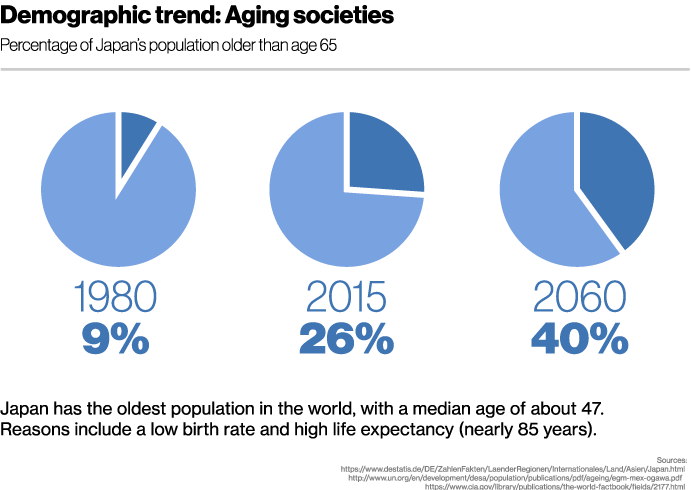 Generally, the older people get, the more they have chronic illnesses. They require more frequent and longer hospital stays and they need treatment for physical or mental frailty. And Japan is shouldering a double burden. In addition to higher costs for geriatric care, there are fewer nurses to look after more and more senior citizens.3 With too few people on staff, Japanese hospitals and care facilities are trying to use technology to bridge the gap.

For example, robots or machines might start the patients’ day by helping to lift them out of bed. Later in the day, other robots on wheels might serve meals. And humanoid robots even offer companionship, such as electronic animals that provide dementia patients with emotional support.  While this is a good start, healthcare systems like Japan’s will need more than robotic assistants for other types of care. This is where people in the medical community are rethinking how they can reallocate available healthcare workers. 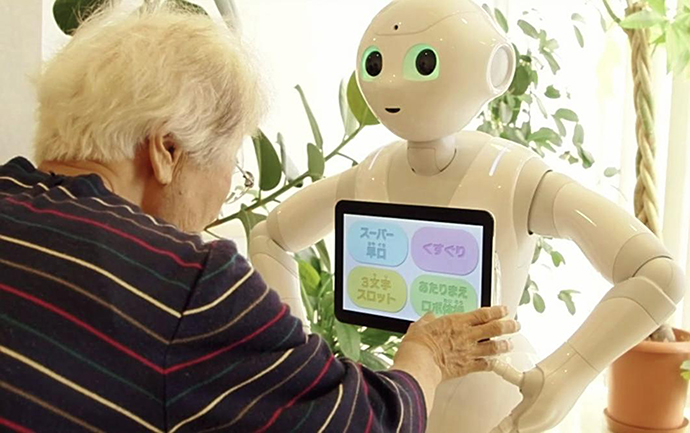 In Japan, elderly patients who have a hard time getting to the doctor might find it more convenient to visit other types of care professionals, such as pharmacists. Goro Ikushima, who heads the Pharmacy Department in Matsudo City Hospital, offers one vision. “We should allow pharmacists to give an injection, take a blood sample or use a stethoscope. These procedures could be based on protocols created by doctors, for example to monitor the adverse effects of a drug,” says Ikushima. More healthcare professionals mean greater availability for the elderly. “This way, we can provide some services for the increasing number of patients who receive care at home.” 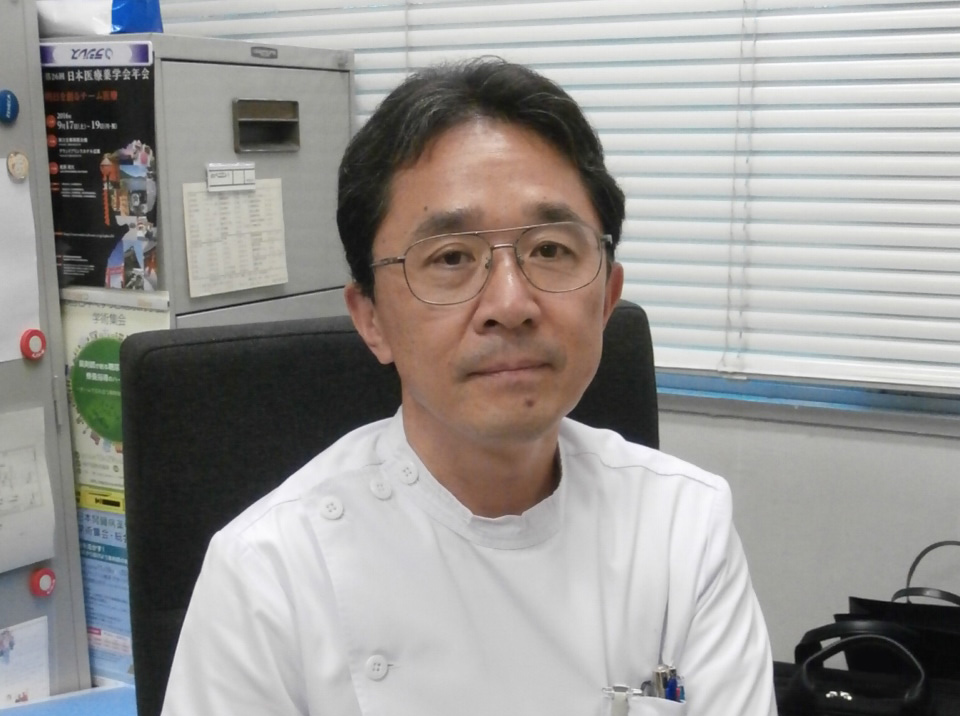 Goro Ikushima, Head of Pharmacy Department in Matsudo City Hospital, Japan, sees the aging society as a chance for innovations in Japan’s healthcare system. By allowing pharmacists to offer certain medical services, he says, “we can maintain this country as a place where patients can have long lives with trust in the healthcare services they receive.”

For centuries, cities have pulled people in with the promise of jobs, schools, and better prospects than dawn-to-dusk work on the farm. Historically, urbanization has helped societies to prosper, serving as an engine of industrialization and economic growth thanks to a large pool of skilled labor. The effects of this development are still visible today.  In high-income nations, such as in Europe and the US, about 75 to 80 percent of people now live in cities. And, in many low-income countries, cities are growing in size as people leave rural areas behind. Urbanization is particularly strong on the African continent, whose cities are among the world’s fastest growing. Experts predict that 60 percent of Africans will live in urban areas by 2050, up from 40 percent today. 4 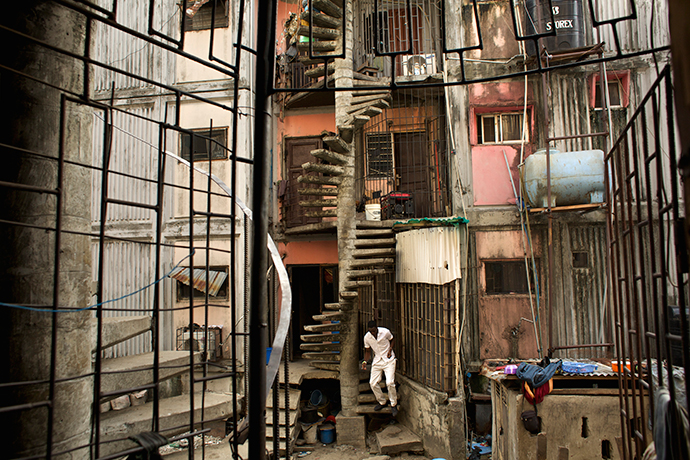 With about 21 million people, Lagos, Nigeria is Africa’s largest city. And its population is increasing faster than almost any other in the world. Lagos is home to some of the richest people in sub-Saharan Africa, but many poor residents lack basic comforts and medical services. Credit: Robin Hammond / NOOR/laif

It’s true that living in cities can help people move up the income ladder. But, alongside new and modern megacity neighborhoods, huge slums have also developed, which offer only very basic sanitation levels and may lack access to water, electricity and medical care. In Sub-Saharan Africa’s largest cities, urban health systems are not keeping pace with population growth, nor can the number of physicians and the amount of hospital capacity expand fast enough.5 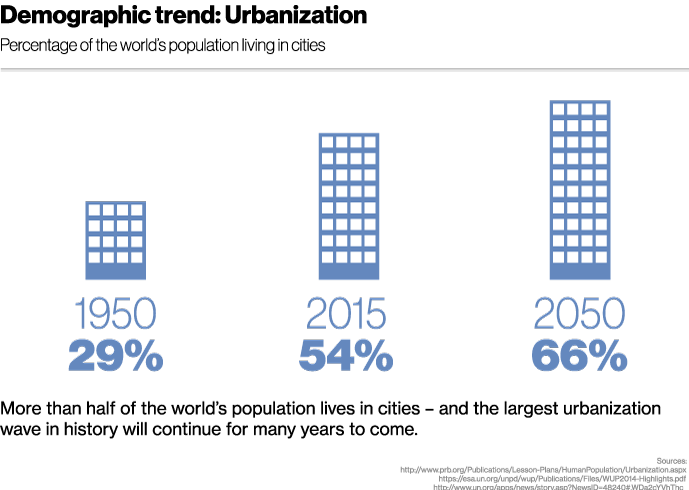 What happens then is that people in dense urban areas find themselves facing a very different set of health risks, such as infectious diseases that can spread quickly. Also, compared to rural areas, more people in cities are injured through violence and traffic accidents, and, because of smog and congestion, air pollution presents a greater health threat.6

Recognizing that something needs to be done, public and private groups are joining forces to improve healthcare in urban areas of Africa. For this purpose, in February 2017, the Novartis Foundation hosted a dialogue called Urban Health in Africa in Cape Town, South Africa. At this event, experts from urban health organizations and academia, policy makers and private partners gathered to discuss urban planning, public health and healthcare. And indeed, dialogues such as these are translating into strategies for stronger health systems. 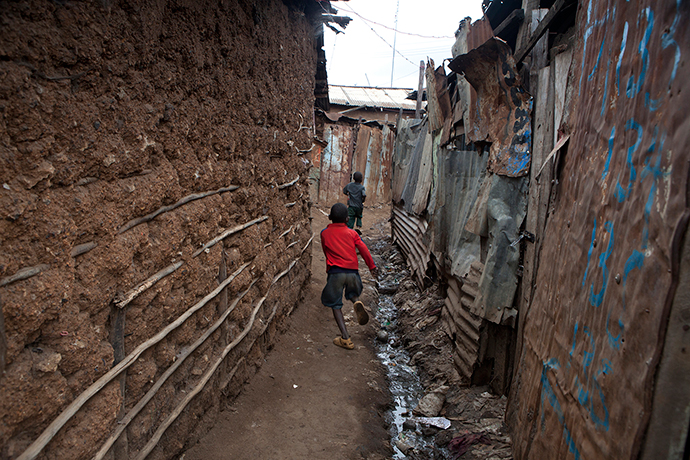 Boy running through a narrow alley in Kibera, in Nairobi, Kenya, often called the largest urban slum in Africa, and home to hundreds of thousands of people. Many of Kibera’s residents are ambitious, and make ends meet with their own small businesses, yet medical services do not reach everyone.

Turning strategies into reality calls on people to work together at all levels. At the city level, urban planners ensure that medical facilities are built in safe areas, so that medical professionals will willingly work there, and that patients can seek healthcare services without fear. At the next level, in hospitals and clinics, physicians are partnering with international volunteer groups or charities, to provide their facilities with access to external resources. At the community level, community workers might use telemedicine to bring healthcare to poor neighborhoods and help spread public awareness of health topics.7

And residents themselves often push for change, starting their own initiatives to improve the health of the urban poor. Perhaps the best-known large-scale example is Shack/Slum Dwellers International (SDI), a network of community-based organizations in 33 countries in Africa, Asia, and Latin America, who share experiences and data as they work to achieve better living conditions. Wherever concrete is being poured, grass-roots change can keep more urban residents healthy and productive.

The demographic impact of mobility goes beyond just moving from the countryside to the city. Many people move between countries and continents in hope of a better life. Although such migration influences the population size of a country much less than births or deaths, one long-term result of this migration is that ethnic makeup can shift remarkably, as seen in the United States.8 Here, the shifting cultural demographics mean healthcare systems that have evolved over decades no longer fit the needs of millions of patients. 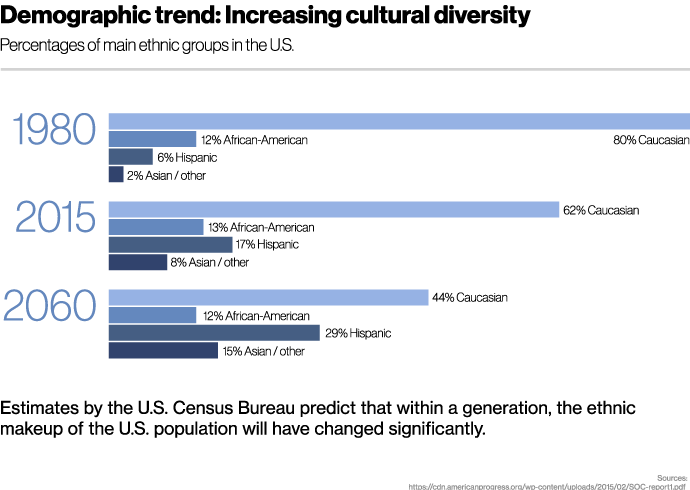 Traditionally a land of immigrants, the majority with European backgrounds, the US is becoming increasingly ethnically diverse.9 By 2044, the percentage of the US population that identifies itself as Caucasian will no longer be in the majority.10 Because this ethnic diversity will also affect healthcare needs, the medical community is taking a new look at which healthcare services should be offered and who should offer them.

For example, Latin Americans are the largest and fastest-growing minority group in the US, but the percentage of Hispanic doctors is actually declining.11  Dr. Gloria Sanchez, from UCLA’s Center for the Study of Latino Health and Culture, says the shortage could affect healthcare for Latinos living in the US, since culture and language play a role in treatment outcomes. For example, someone may speak enough English to order breakfast in a coffee shop, but be unable to describe symptoms of advancing diabetes.

“When a patient does not understand the language of his doctor, he or she is likely to find it challenging when seeking medical care,” Sanchez says. She adds that research has shown that Latino patients with limited English-language skills visit doctors less frequently than those with better English proficiency.Yet Hispanics represent a huge market segment and health plans that address them, in any language, are better positioned to win them as customers. 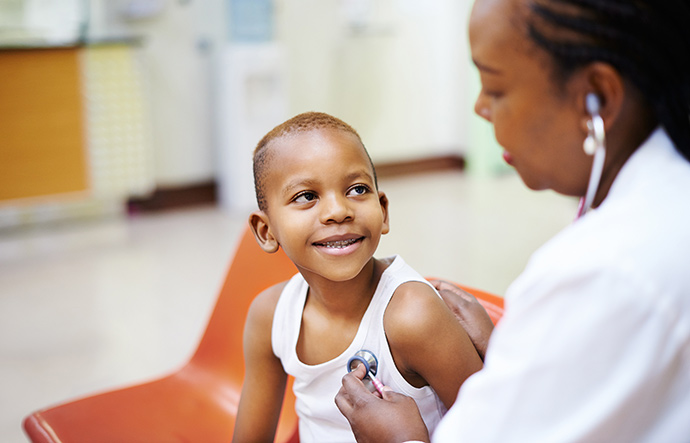 Roughly one in four people in the US are Asian, Latin American or African- American, yet there are not corresponding numbers of physicians from the various ethnic groups, according to the Association of American Medical Colleges.

Talking about cultural diversity also raises another question: Do patients feel more comfortable with physicians who share their ethnic background? The answer is that some patients do find it easier to build trust, at least. Currently, about one quarter of the US population is comprised of Hispanics, African-Americans and Asians, yet only about six percent of physicians belong to one of these ethnic groups, according to the Association of American Medical Colleges. To better reflect the diversity of US society, the AAMC calls for a more “culturally competent healthcare workforce,” adding that “one of the most pressing healthcare challenges facing the nation is the critical need for more minority physicians”.12

There is another reason why it may be helpful that physicians share the ethnic backgrounds of patients in their community. Medical professionals might find themselves dealing with a different set of medical conditions, because some conditions are linked to specific ethnic groups. For example, Asians are more likely to contract hepatitis B.13 Conditions such as high blood pressure and sickle cell anemia are more common among African-Americans and people from the Middle East or India.14 Among the Hispanic population, diabetes and liver disease occur more frequently.15 So, medical professionals who are culturally aware can offer more relevant advice and treatment. Their patients will be more willing to seek medical assistance and be more satisfied with the care they receive. 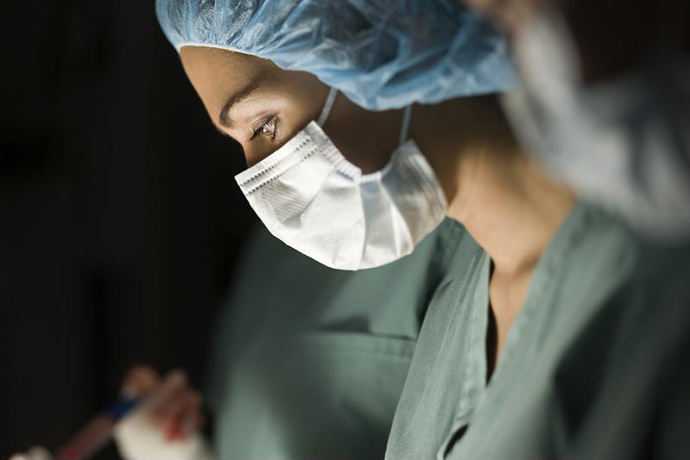 Latin Americans are the fastest growing ethnic group in the US, but the number of physicians with the same ethnic background is declining. In healthcare, language or culture might present a barrier. Some patients may find it easier to relate to a doctor of similar ethnic background. Credit: Mauritius images / Rubberball

Demographic trends are increasingly challenging today’s healthcare systems. Public health specialists and members of the medical community who are aware of changes in the makeup of their society can anticipate future trends and their consequences for healthcare systems. Access to healthcare, whether in low- or high-income nations, depends on more than the availability of medical resources. Whether planning new facilities, organizing medical-services programs or training the next generation of healthcare professionals, meeting the needs of aging, moving and more ethnically diverse populations will result in better care for everyone, and move medical services along the path toward more patient-centric care. 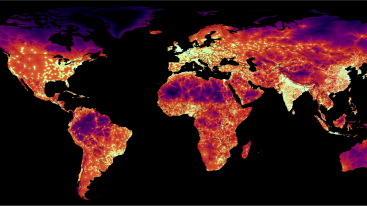 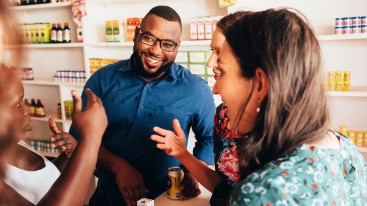 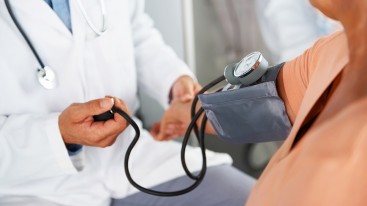 What are the big healthcare challenges in individual countries? (8 min read)